Successes in the UAE and KSA, other emerging markets demonstrate AIG’s innovative global leadership in the live social industry 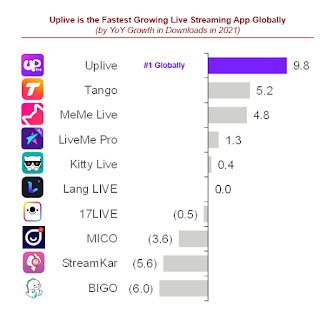 The global rankings, which come hot on the heels of the app’s unveiling of its first-ever Television Commercial for the Middle East region, which aired on Rotana, and a raft of GCC-centric features, exemplified AIG’s leadership in the global live social industry, and are results of AIG's continued focus to serve the emerging markets.

Uplive, the largest independent global video social entertainment platform, has consistently risen to become the top consumer spend app in APAC in 2021, according to App Annie. Uplive has also emerged as the fastest-growing live streaming app globally as measured by year-on-year growth in downloads, according to Sensor Tower.

Since the unveiling of the GCC-wide campaign, Uplive has attracted a large number of GCC-based live streamers, which has, in turn, boosted its Middle East subscriber base significantly with KSA and the UAE accounting for the lion’s share.

According to AIG, the leading live social company with 520 million registered users located in over 150 regions worldwide, Uplive’s growth in users was matched by significant revenue growth, where Uplive moved to the third fastest-growing Android app globally.

“We are pleased to be ranked as the third fastest-growing app in the world – an achievement that has been made possible by our ever-growing global fanbase. The app’s popularity is fully driven by the consumer-centric features and value it delivers to all its users. Through innovation, we have been able to design a value-driven platform that not only delivers real, customised entertainment to users but also provides a safe space for young entertainers to showcase their talents and earn while doing what they love,” said Andy Tian, chief executive officer, AIG.

“AIG is dedicated to providing an unbeatable user experience across our products, which our tremendous growth in 2021 reflects. We are proud of our leadership in the global app industry and our supremacy in emerging markets, including the GCC and the talent-rich UAE in particular. Our significant growth in 2021 is just the beginning; we look forward to introducing truly ground-breaking features in the upcoming year,” noted Andy.

As the foremost company producing live social products, AIG is strongly positioned as an industry leader in live streaming and dating apps. By placing a priority on emerging markets such as the Middle East and diversifying their offerings for local markets, AIG has tapped hitherto neglected but talent-rich markets to serve a truly global user base.

Asia Innovations Group is a leading live social company with 520 million registered users located in over 150 regions worldwide. It has built a comprehensive and diverse portfolio as it seeks to achieve its mission of enriching people's lives worldwide through innovative and enjoyable live social products, which foster meaningful human connections. In addition to Uplive, which allows video social hosts to broadcast to the world, AIG owns CuteU and Lamour, the top dating app in global emerging markets. It includes operations in 18 offices around the globe that integrate local live social knowledge to foster individual market development and penetration. Focusing on major emerging markets, AIG leverages its track record of innovation, cutting-edge technology, a scalable global infrastructure, and global insights with local expertise to deliver user and shareholder value based on the most exciting growth opportunities in the live social marketplace.