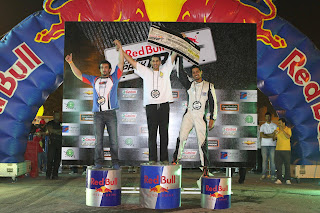 Following a series of exceptional drift shows that proved the superior skills of Saudi drivers, the third Red Bull Car Park Drift qualifier took place in Al-Khobar, where Muaaz Alesawas announced the third winner to represent the Kingdom in the Beirut finals.

ALesa received the trophy from Mr. Abdulla ALqahtani, head of tourism committee in chamber of commerce and industrial, eastern region.

This event was organized under the auspices of the General Presidency of Youth Welfare and the Saudi Automobile Federation, and sponsored by Chevrolet, Hankook Tires and Castrol Lubricants.

The competition itself took place on a specially designed track that would bring out the best drifting techniques, which resulted in a wonderful exhibition of outstanding drift shows by the elite drivers selected after the preliminary qualifiers on the night before.

With their specially modified cars, drivers managed to take on the twists and turns of the track with exceptional precision, while drawing the admiration of the cheering spectators. The competition reached its peak towards the final rounds before the judging panel selectedMuaaz Alesa(BMW M3) as the winner of Al-Khobar qualifying round. Ahmed ALkhuaiter (Hyundai Genesis)and Ahmed ALesa (Chevrolet Corvette) came in second and third respectively.

Muaaz Alesawas thrilled to have accomplished this win and proud to represent the Kingdom in Beirut where he hopes to snatch a podium position. Healso assured that the preparations for the regional title will start immediately.

Ahmed Soudodi, Chevrolet Marketing Manager at General Motors Middle East Operations said: “We are very happy to renew our partnership with Red Bull in 2012. Chevrolet Camaro is one of the most iconic muscle cars in the world that excels by almost every objective and subjective measure – design, power, handling, efficiency, comfort, convenience, safety, and most of all great value.”

The judges evaluated the drivers’ performances based of specific criteria. Red Bull driver, Abdo Feghali, explained the technical standards on which the judges relied to make their final decision, saying that “the final score is based on four factors; 70 percent allocated to the art of drift while the remaining score is equally divided between the engine’s roar and tires’ smoke, crowd’s reaction and the appearance of the car”. Feghali added: “This season, we are also stressing on a number of factors that might give penalty points to the drivers such as hitting the separators on the track, or getting away from the track”. However, Feghali was undeniably impressed with the drivers’ performance and the high level of the competition, which “clearly reflects the awareness drifting arts have gained in the region”.

The first Saudi round was held on the 5th of April in Riyadh, where Hatim Natto came first; Abdulhad Al-Qahtani won Jeddah's round which took place on April 12th; and both drivers along with Muaaz Alesawill represent Saudi Arabia in the Regional Finals in Beirut this summer.

Red Bull Car Park Drift was launched in Lebanon five years back; two years later, it became a regional competition. Before gaining international fame and exposure, the concept of drifting started in Japan back in the 1970’s based on the idea of competing in a parking lot.